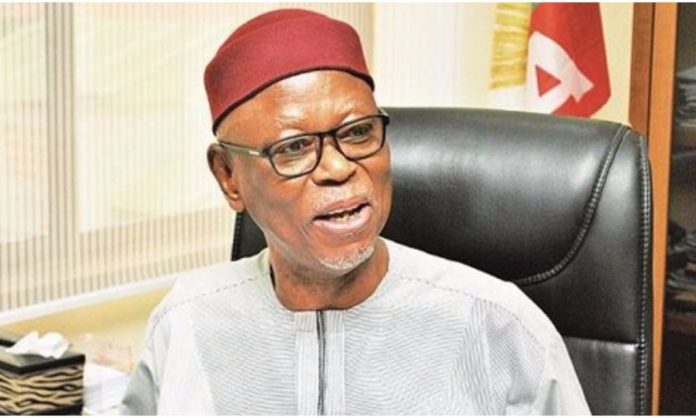 Former National Chairman of the All Progressives Congress (APC), Chief John Odigie-Oyegun, has warned that President Muhammadu Buhari and the ruling party must address the spate of separatist agitations in the country through democratic means instead of deployment of military as solutions.

The former Edo State Governor made the appeal during the Public Presentation of a book, APC’s Litmus Tests, authored by the Director-General Progressive Governors Forum (PGF) Salihu Moh. Lukman, in Abuja during the weekend.

According to him; “Let me refer to just one aspect of what Governor Badaru said. That is the document on true federalism which the party put together that passed through all the organs of the party. The executive of the party, the NWC, the Caucus, the NEC which is the highest organ of the party.”

“Why did we do it at that time? We did it because like, it is happening today, there was this cacophony of voices. Two people in the party could not agree on what they meant by restructuring. So the party needed to take control of the debate, define the issues, proffer solutions and went so far as to have some drafts legislation. It is not by any chance a perfect document.

“But it reflects then the thinking and the desires of the Nigerian people. Everybody kept quiet after we brought that document out, publicized it, held press conferences over it and most Nigerians were very, very happy. But once again, we did not make the kind of progress that we could have made and it has become once more, the topical subject in the Nigerian polity.

“Unfortunately, it has gone beyond us, we now have one or two things that did not happen before, people now wanting to disengage from the federation, which did not happen before and that is a warning sign. If a child ask for garri today you don’t give him, tomorrow he may decide is cake he wants and we must not, as political party, we must not as the government of the federation, give the impression that only military governments can fundamentally tamper with the basic structure of this nation,” he said.

While cautioning further, Odigie-Oyegun said: “We are in charge today, a progressive government, a progressive regime and I think it is proper that we show to the nation that when the people want some degree of change we should be responsive to it, we should address it. Compromises have to be made, there’s no question about that. The report itself is not final. It still has to go through the litmus test of compromises.

“The ideas of people from different parts of the country will be different up to the extent they want to go with the proposals in the document, but it is necessary. It is vital that it is in fact, mandatory in the interest of the survival of our nation, that these issues be addressed. We cannot continue to allow the subject

to become something that threatens our nation at any turn.

“Today we are having all sorts of organizations cropping up with all sorts of names. We haven’t defined their operational status, we haven’t defined their relativity properly with the establish security agents and the rest. But sitting down together we can work out so that we know the relativities between the existing structures and the existing institutions. This is by way of saying thank you very much for writing this book.

“I suppose a profound avenue of creating a new structure for the party from bottom up like the one Governor (Bagudu) emphasise, that will deliver and that will create the kind of leadership, the kind of example that will make democracy survive in this country and keep our country one. It is necessary, it is in that book, fundamental that parties themselves must obey their own rules. Very fundamental. You can stretch the rule. Never break it,” he quipped.

The former party boss equally emphasised: “Secondly, it is very fundamental that in all we do, the ranks-and-file members of the party and of parties generally, are able to see that even when they lose, they have been treated fairly, they have been treated decently because what I observed, I was made the Chairman of the reconciliation group in the South-South and in every single case, you have a situation where during elections, the civil war within the party alone, makes it impossible to think of it.

“Why is it civil war? It is civil war because critical stakeholders in the party see that they have not been fairly, justly treated,” he said.

Defending why the ruling party failed to meet up with some of the campaign promises, he said: “I am waiting anxiously to see what is in this book. It is of immediate importance because the APC, like, the Governor (Bagudu) had said or implied, is a very special party. There’s no question at all that nations and parties are going through very difficult times.

“But for all those who were at the formation of the APC, the uniqueness of our Constitution, the absolute beauty of our manifesto that promised change, and we all meant that change with all our hearts and all our beings.

“Unfortunately, the forces of economics have made things, not quite the way we wanted them to be. So, your book coming out at the time, it is coming out, the fact that we must to do everything because a lot of people have not read our Constitution, a lot of people have not read our manifesto, they are so basic and so full of heart, so full of love for this nation, so full of things that need doing and still need doing that everything must be done to keep the APC virile, not just alive but very virile.

“But this is a phenomenon that is virtually worldwide. The only issue, of course that I always take … is the issue of security and it is my hope that even on that, because is so basic. Without that any other thing you are talking about is a bit of a waste of time. So, it is my hope, that we will begin to get control of the security of this nation,” he charged.