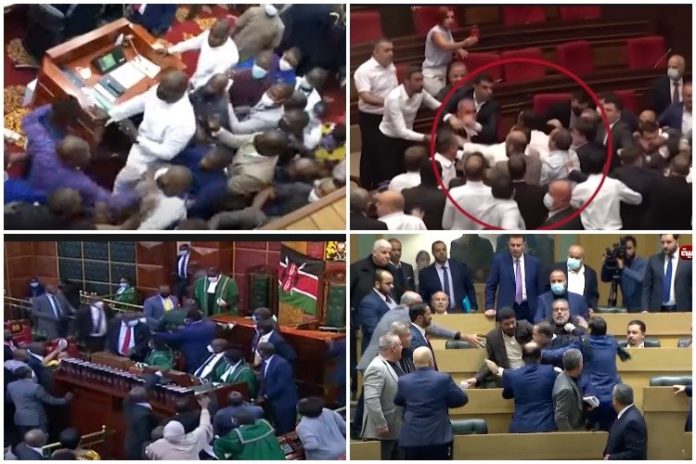 The legislative arm of government is the one tasked with the responsibility of making laws and it is expected that they would be lots of jaw-jaw to reach compromises and make laws beneficial to their constituents.

However, situations in these hallowed chambers can degenerate into shouting matches and outright brawls.

In this piece, we chronicle times lawmakers of different nationalities resorted to their fists instead of talking in the year 2021.

On Tuesday, the Jordanian parliament dived into chaos with lawmakers throwing punches at each other after a discussion on a constitutional amendment that would mean greater rights to women, got heated.

Video from the floor of the house shows a handful of lawmakers in a physical fight, some trading threats and insults. Even the speaker of Parliament lost composure as he resorted to shouting to manage the melee.

On Wednesday, Kenyan lawmakers fought on the floor of the National parliament, while debating a controversial bill governing political parties ahead of next year’s election.

According to reports on local media, two rival Members of Parliament exchanged blows and one of them got injured in the eye. Videos showed him demanding the intervention of the Speaker as his eye bled had trended.

Closer home in West Africa, on Monday, December 20, 2021, a debate in the Ghanaian parliament on a proposed tax on electronic transactions led to a brawl.

President Nana Akufo-Addo’s government had introduced   1.75% fee on electronic transactions. The opposition was against the new levy scheduled to take effect from  February 1, 2022.

On the Asian continent, lawmakers sometimes swing punches when they can’t have their way with words.

A fight had broken out on the floor of the parliament in August after a ruling party lawmaker described some of the country’s past defence ministers as “traitors”.

This statement led to objects being thrown across the floor of the house, even as the lawmakers got physical with each other.

In September 2021, opposition lawmakers interrupted the annual speech of the Speaker, Su Tseng-chang. Their actions resulted in some shoving even as others poured water on their opponents.

At the end of the day, Su was unable to deliver his speech.

Fights on the floor of the National Assembly are not new. On July 15, a fight broke out at the House of Representatives, as lawmakers debated the electronic transmission of election results, which is a major component of the Electoral Act Amendment Bill.