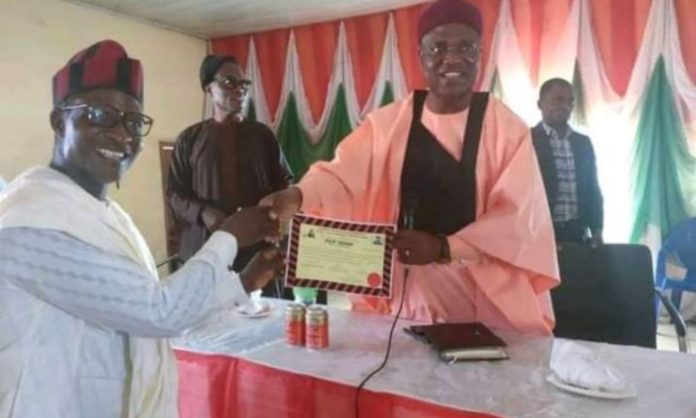 A new Och’Idoma has emerged as the paramount ruler of the Idoma Nation. He is Chief John Elaigwu Odogbo from Obagaji, headquarters of Agatu Local Government Area of Benue State.

Odogbo, a pastor with Deeper Life Ministry and a retired Assistant Director with the Federal Inland Revenue Service (FIRS) emerged on Thursday through an election conducted by the Idoma king makers.

It was gathered that four contenders for the stool whose the nomination committee selected including Andrew Idakwu, John Bamaiyi, Sunday Echono and Pastor John Eliagwu Odogbo went into the contest.

It was further gathered that out of the 28 votes cast by the king makers, Andrew Idakwu got one vote, Pastor John Elaigwu Odogbo got 19 votes while Sunday Echono got eight votes.

Idoma traditional council, after the election which held in Otukpo, the ancestral home of the Idoma Nation, moved to the Government House in Makurdi where the Och’Idoma elect was presented to the state Governor, Samuel Ortom.

In a remark, the Och’Idoma elect who described Governor Ortom as a blessing to his generation promised to work with the state government and never disappoint the Idoma Nation.

Receiving the new Och’Idoma, Governor Ortom congratulated the Idoma Nation, the King makers, the Idoma and Tiv Traditional Council as well as the entire people of Benue for the peaceful conduct if the selection of the new Och’Idoma.

The Governor who noted that since the dedication of the state to God after his emergence as Governor in 2015, transparency had been his watchword, promised to work with the new paramount Ruler to succeed.

It will be recalled that the paramount ruler of Idomaland, His Royal Highness Elias Ikoyi Obekpa went on hunting expedition in October, 2021.

Obekpa was a native of Ogbadibo and ascended the throne in 1996 following the exit of HRM Abraham Ajene Okpabi.