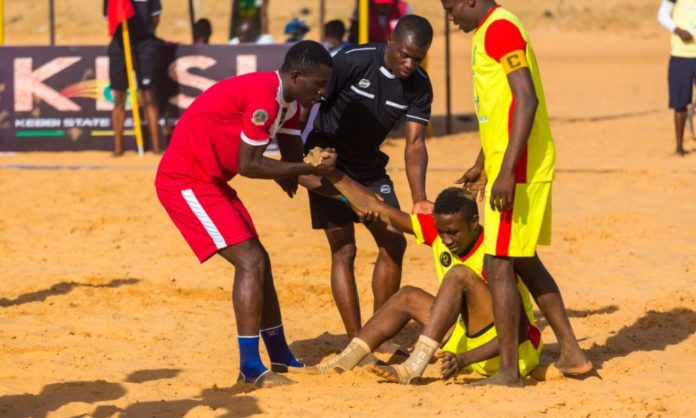 Kebbi state government has vowed to continue to support Beach Soccer tournaments in the state as part of activities to engage youths in the state.

Kaliel,represented by the Permanent Secretary of the Ministry, Alhaji Shuaibu Aliero  said that the State Governor, Senator Abubakar Atiku Bagudu has been Sports loving Governor and he would continue to support the game.

He said: “Like you are aware,Kebbi state government has been supporting every activities that concern the youths in the state,including Beach soccer.  His Excellency,Senator Abubakar Atiku Bagudu is a lover of Sports and he has been given the game maximum support needed to excel.

” I can assure our youths that, the government will continue to give its maximum support to the game through the Ministry of Youths and  Sport Development. Even now,Kebbi state government is planning to give Beach soccer tournament a face-lift for it to continue to prospers in the state”, he said.

Earlier, the President of African Beach Soccer Union, who is also Chairman of Kebbi state Beach Soccer Association,Mr. Mahmuda Hadeija commended the players of the teams who participated in the super 4 second edition for displayed professionalism in their matches.

He noted that, the officiating too from the Referees have  also improved stressed that, that made the game to be more competitive and enjoyed by the fans.

According to him,”I think the teams are closely competing with each others.  In terms of quality,we have seen the quality in their games and I think,this is one of the best tournament we have had in terms of quality, competition among the teams”, he said.

Hadeija,also disclosed that, the national tournament of Beach Soccer will be hosting by Kwara State next week, where various States would participates.

He commended the Kebbi state government for its support, stakeholders from Jigawa state and from across Nigeria who came to Kebbi state to support the beach soccer super 4 tournament in the state.

In his remarks, the Chairman of Local Organising Committee(LOC),Abdullahi Yahaya disclosed that, many youths have been eager to participate and joined Beach soccer clubs as they realized it was an open door for them to excel in their career.

He also commended the Referees for proper officiating, stressed that they have made the matches worthy of watching for the fans of the game.