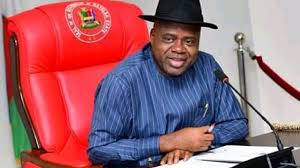 Youth groups in Bayelsa State have commended what it called giant strides being recorded by the Governor Douye Diri administration in the areas of infrastructure and youths empowerment in the different parts of the State.

The youth groups, under the aegis of the Bayelsa Eminent Youth Leaders Forum (BEYLEF), after a tour of the various projects in the state including the Elebele Bridge, the 4.58km Igbedi road project, the Nembe Unity Bridge, Ultra-Modern Transport terminal, Onopa bridge, the ongoing Glory land drive and the AIT link road and the 21st Century Media complex, declared that the projects are commendable and beneficial to the people of the state.

The Chief Convener of the Youth groups, Mr Ebilade Ekerefe, said though the youth groups are made up of patriotic and people – centric mass movement in Bayelsa State, the decision to undertook an independent, self- funded and assessment of developmental projects was based on the need to have first-hand information on the projects executed and those still ongoing under construction by the present administration in the state.

Ekerefe during a media interactive session at the secretariat of the Nigerian Union of Journalists (NUJ) in Yenagoa, noted that despite the issue of paucity funds facing states, the Diri administration has been able to construct laudable projects for the state.

The youth group also passed a vote of confidence on Diri and his deputy, Sen. Lawrence Ewhrudjakpo over the silent infrastructural revolution that is taking place in the state.

“Governor Diri has intervened in many areas of the state. On health, education, sports, agriculture; etc. This has greatly impacted on the human capacity development of the state. For instance, the 60 – metric tons daily Cassava Processing Factory at Ebedebiri, in Sagbama Local Govt. Area has commenced operations and would absorb a significant number of youths in the state. Also, the rice production facilities in the state would productively add value to the economy of the Bayelsa State and put the highly productive energy of the youths in the state into gainful ventures thereby reducing crime and criminality”

“Education, health, sports and security have all witnessed massive intervention within the two (2) years of the Miracle Governor’s reign in office – this has greatly improved the Human Capacity Development index of the state within our clime and amongst other developing nations”.