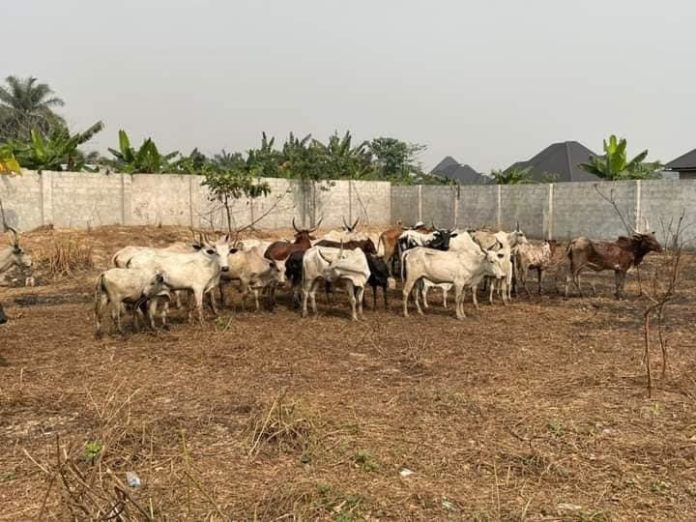 The Bayelsa State Government has clamped down on violators of the anti-open grazing law in the state.

To this end, it arrested 44 cows found grazing along Imiringi road, Ogbia Local Government Area of the state.

He also set up the Livestock Management Committee headed by the Commissioner for Agricultural Resources, Mr David Alagoa, with members drawn from the security agencies.

The farmers had lodged their complaints to Alagoa and the state task force to help arrest the situation before things get out of hand.

Alagoa had during a patrol over the weekend arrested the cows while the herders escaped into the bush to evade arrest.

The arrest followed a complaint to the task force by farmers along Imiringi road near Megastar camp where the cows were said to have destroyed crops.

Alagoa said the task force would continue to take action to demonstrate that the state government would not condone the flouting of its laws.

Meanwhile one of the farmers, Mr Tempo explained that his farm at Elebele where he planted maize and cassava has been destroyed by cows.

He urged the state government to take more action because any farmer that tries to confront the herders is usually threatened with an attack.

“Please I want to use this medium to draw the attention of the Governor and the task force enforcing the Bayelsa State livestock breeding and marketing regulation law that the herders have adopted a new strategy of moving at nights between the hours of 11 pm to 5 am every day, destroying people’s farms along the Elebele.

“This clarion call is Paramount to avoid loss of lives from these wicked and mindless herders and also help Bayelsa achieve its food security next year.

“When I summoned the courage to confront them as they were coming out from my farm angle, the herders threatened to attack me. Please the government and the other relevant authorities act swiftly,” he said.