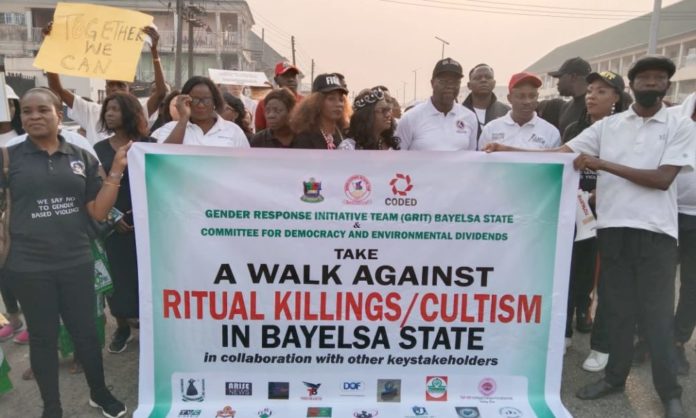 Disturbed by the recent cases of attempted ritual killings in Bayelsa State, the wife of Bayelsa governor, Dr Gloria Diri on Thursday led other groups on a public campaign against ritual killing and activities of Yahoo-yahoo boys in the state.

A Niger Delta University (NDU)student, Deborah Emafidion and a 13-year-old girl (name withheld) were recently rescued from suspected ritualists in the state.

The public campaign put together by the Gender Response Initiative Team (GRIT) and Committee for Democracy and Environmental Dividends (CODED) and other groups armed with placards with inscription such as ‘Save Our Children from Ritualists’ ‘No to Ritual Killings,’ Join GRIT to stop senseless killings’, ‘Bayelsa is peaceful not for harvesting human parts”, commenced with a 12 kilometre walk and distribution of flyers from Ekeki Park, Azikoro road to the Peace Park, opposite the Bayelsa State Government House.

Dr Diri, who incidentally is the initiator of GRIT, expressed concern over the strange cases recorded and the involvement of teenagers in attempted ritual killings in the state.

“The land of Bayelsa rejects such a dastardly act and by this peace walk, the stakeholders in the state reject such acts. The youths and women of Bayelsa reject it. I urge everyone to be their brothers’ keeper. If they try it in other states, Bayelsa will not condone it any longer. For everyone that enters the state, the gods of the lands and the security agents are watching. Let us watch and protect one another against ritual killing. For those caught in the act, we will ensure that the law takes its course. We are also now against out-of-court settlements and we want the law to punish the perpetrators,” she said.

“The state Government has once again reiterated its resolve to end all forms of violence in the state as perpetrators of ritual killing and cultic groups will be prosecuted,” she said.

Chairman of the Collins Cocodia Foundation and Special Adviser, Political to Bayelsa Governor, Chief Collins Cocodia, also expressed concern over the cases of ritual killings and called for a concerted effort to nip it in the bud.

While commending GRIT and CODED for putting the campaign together, she called on security agencies to step up operations to be able to track perpetrators of all forms of violence.

Other groups that participated in the solidarity walk include International Federation of Female Lawyers (FIDA), Gloria Diri Foundation, Collins Cocodia Foundation, Do foundation among others.