Two persons have died in a fatal motor accident which occurred in last Friday on the Potiskum-Dambam road at Dagauda in Dambam Local Government Area of Bauchi State in which 22 others sustained varying degrees of injuries, while 18 camels were also killed.

This was revealed in an RTC report by RS12.12 of the Federal Road Safety Corps (FRSC), Dambam office, released to journalists in Bauchi on Monday.

According to the report, the accident occurred on the 11th of March, 2022 about 11:50am and it happened 21 kilometres away from Dambam, at the first junction to Dagauda town.

It added that the accident was reported at the office by 12:22pm and that Corps personnel arrived the scene of the accident 11 minutes later.

According to the report, the accident involved one commercial Toyota Hiace bus with registration number, GRR 39 XA belonging to the YOBE Line fleet.

The report revealed that those who lost their lives were two male adults, while the 22 injured people were made up of six male adults; 11 female adults and five children comprising three girls and two boys.

The cause of the accident, according to the FRSC report, was over-speeding and obstruction of the road.

The report further stated that the remains of the deceased were taken to the General Hospital, Dambam, for confirmation of death while no item was recovered from the scene of the accident as reported by the Police Motor Transport Department in Dambam as well as ARC JS Muhammad, FRSC STO in Dambam LGA.

Meanwhile, a lecturer with the College for Legal and Islamic studies Misau, Sulaiman Umar, who reported the accident, informed that some flock of camels were crossing the road when a Toyota Hummer bus rammed into them, which led to the death of two persons and 18 camels.

“On that fateful morning of Friday, 11th March, 2022, we woke up to witness an accident involving a Hummer bus and a flock of camels while crossing the road abruptly around 10.00am,” he informed.

According to Umar, the dusty weather as a result of harmattan contributed to the accident, explaining that visibility was very poor on that fateful day. 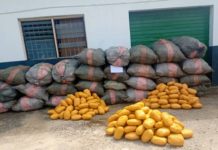