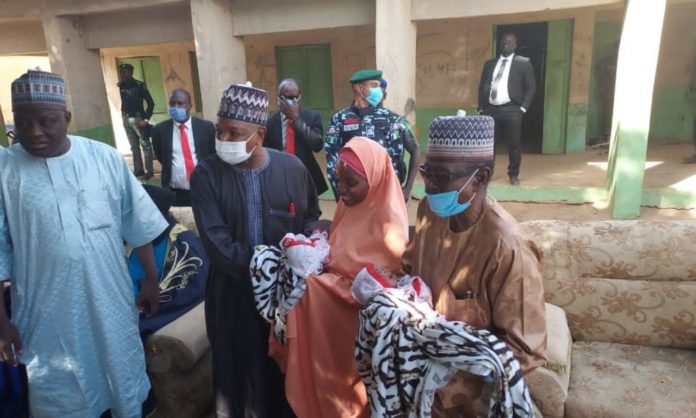 Kebbi State Governor Abubakar Atiku Bagudu has restated the commitment of the state government to return all Internally Displaced Persons (IDPs) displaced by bandits attacks to their various towns and villages.

Some of the communities affected by the bandits attack recently, include Makuku,Sanganga, Janbirni,Kwagano,Maganda,Leke,Kango,Gareji,Daura,Dankolo and Dokabere.

While addressing the IDPs, Bagudu explained that the three tiers of government, security agencies and other critical stakeholders are doing their possible best to ensure that normalcy were restored as soon as possible to the affected villages and towns.

The governor also expressed his heartfelt condolences on the death of three persons due to bandits’ attacks in the area, as well as commiserated with the generality of the people of the area and promised that relief assistance would be distributed to the IDPs latest by the end of Friday.

The Chairman of Sakaba local government, Hon Dauda Muhammad, in his remarks, commended the Governor for his tireless efforts to ensure the return of peace and security to the area.

He welcomed the deployments of military and other security agents in the area, adding that this would boost the security of lives and properties of law-abiding citizens.

The Districts Head of Sakaba, Ladan Musa also lauded the Governor for working round the clock to safeguard the lives and properties of the people of the state.

“That is why Governor Bagudu is even tagged as Sakaba Governor. The new chairman is also emulating the governor. We are requesting more security to safeguard the lives of our people in the area.”

Some of the IDPs, Hadiza Leke, Hajara Alhaji Gareji, Fati Samaila Makuku, Wasila Ahmad and Amina Makuku took time to narrate their ordeal to the governor.

They explained how the bandits attacked their villages, and they made a passionate request for the deployment of additional soldiers in their villages which the governor promised to do.

At Linzamiya Primary School in Dirin Daji, the Governor met Sakina Sanusi, a female IDP who gave birth to twins in the camp.

Bagudu with his Deputy, Col. (rtd) Samaila Yombe Dabai carried the babies and beseeched Allah to bless them.

The Deputy Governor, Col Samaila Yombe Dabai (rtd), also addressed the IDPs to sympathise with them as well as explained the motive of the Governor’s visit.

Special prayers were offered by Allaramma Abubakar Marafa and Pastor Nagiru Maidawa for the repose of souls of those who lost their lives and return of peace to the area.