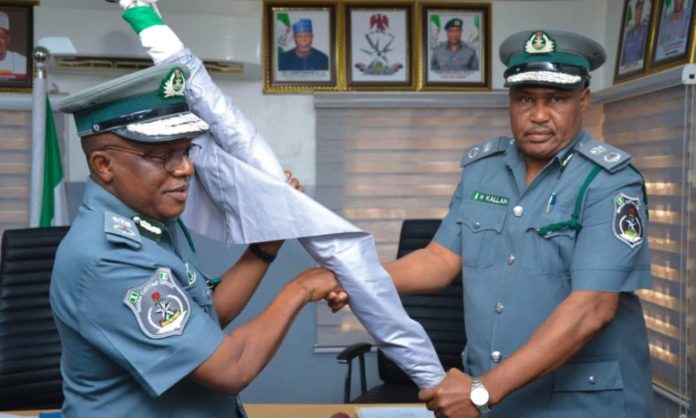 Command spokesman DSC Nasiru Manga, who confirmed this in a statement provided to newsmen in Birnin Kebbi, stated that Attah assumed office on Monday, February 12 after taking over from Comptroller Hafiz Kalla.

According to him, “shortly after taking over the reign of the Command at a ceremony held in the Command Headquarters in Birnin Kebbi, the new Area Comptroller harped on the need for officers and men of the Command to ensure strict compliance to Government fiscal policy on imports and exports of goods.

“He specifically mentioned foreign parboiled rice and petroleum product as some of the items that the Command’s officers and men need to keep watchful eyes on to ensure they are not smuggled into or out of the country. He reminded the officers that the land borders in the Command are still officially closed”, he said.

Attah according to the statement, also promised a robust stakeholder engagement with relevant stakeholders in Kebbi State to engender a culture of voluntary compliance.

“He charged the operatives to avoid conducts that are unbecoming of officers and capable of causing friction between the Service and members of the community.

“Comptroller Attah urged them to be disciplined and cooperate with him as he promised to be a team player with fairness and justice to everybody”.

Earlier, the outgoing Area Comptroller, Comptroller Hafis Kalla while congratulating the new Area Comptroller on his new appointment, urged officers and men of the Command to extend the same support and cooperation they accorded him to the new Comptroller.