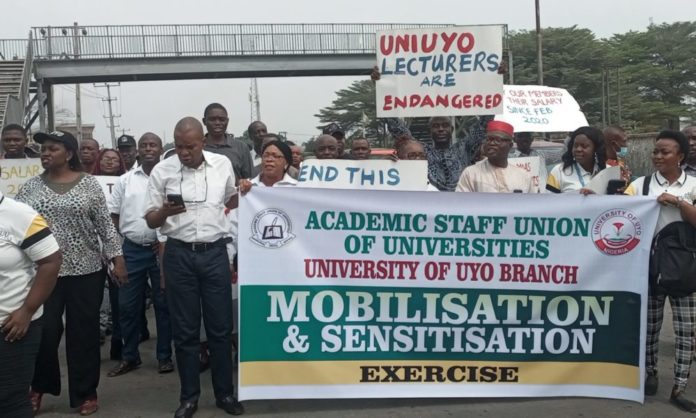 The Academic Staff Universities Union, ASUU, has threatened to resume its nine months old suspended strike, following the federal government’s inability to keep to the agreement upon which it suspended the strike in December 2020.

The Chairperson of ASUU, University of Uyo chapter, Dr Happiness Uduk, who disclosed this to newsmen on Wednesday shortly after a sensitization/mobilization walk by members, explained that ASUU had from the onset told FG of its resolve to return to strike without notice if it (FG) reneged from the agreement, which claimed the FG did.

She lamented that the Buhari-led administration has pushed the union to the point that it has no option than to embark on an indefinite strike.

According to her, “The Federal Government under the leadership of President Muhammadu Buhari, has now sufficiently pushed the union, once more, to the precipice of a nationwide total and indefinite strike through its failure to honour the Memorandum of Action reached with ASUU in December, 2020, upon which the union suspended conditionally its nine-month strike of March to December 2020.

“Today, well over one year later, we regret to inform the Nigerian public, through you (the press), that the government has shown no sincerity to those terms, and nothing much has changed.

“We have waited most patiently for the government for over one year, and yet, there is no concrete sign that the federal government intends to do anything to ward off the ugly situation of another avoidable strike.”

Speaking on the agitations and concerns of members in the Memorandum of Action with FG, Uduk noted that ASUU wants renegotiation, signing and implementation of the 2009 Agreement that was meant to be reviewed every three years.

The chairperson regretted that, 11 years afterwards, the agreement was yet to be reviewed, adding that the implication remained that university lecturers still earn the same salaries they were earning since 2009 despite the current economic realities.

The union also called for the implementation of the University Transparency Accountability Solution, UTAS, and once again rejected the Integrated Payroll and Personnel Information System (IPPIS), the FG’s proposed payment platform for them, saying, technically, IPPIS has abrogated the universities’ autonomy and authority to hire and fire staff, which according to them is “about the worst tragedy the nation’s educational system has ever suffered.”

The chairperson further lamented that due to the obnoxious IPPIS platform, more than 22 academic staff of the university (UniUyo) have not received their salaries since February 2020.

Also, the union regretted that the FG has bastardized the university system with the proliferation of universities by state governments without commensurate funding and urged the federal government to check the anomaly.

The union, however, thanked the nation’s inter-religious groups for their intervention in averting the possibility of resuming the strike, but regretted that the federal government remained adamant to their (ASUU) plights, thereby leaving them with no option than to embark on an industrial action.

DAILY POST reports that earlier, the sister unions of NASU, SSANU and NANS all pledged their solidarity with ASUU and vowed to join them in the action even as all of them walked round the main gate of the university bearing placards of various inscriptions such as ‘End this unholy act now’, ‘UNIUYO lecturers are endangered’, ‘Protect our only university from collapse’ among others as part of activities of sensitizing the public about the impending strike.