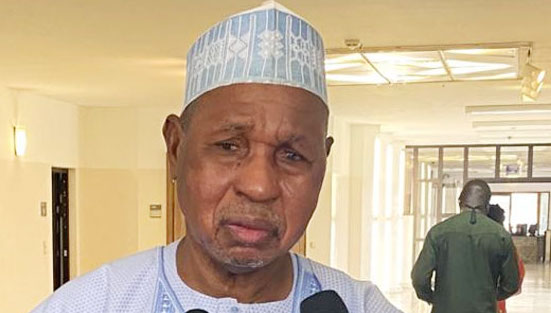 The governor had at a ceremony in Jibia directed residents to acquire arms to defend themselves against seeming end- less and bloody activities of bandits terrorising the residents.

The directive has since generated diverse reactions with the Coalition of Northern Groups (CNG) asking Masari to resign his position as governor.

But reacting in a press statement yesterday, Masari described the management of security matters throughout the country as the sole responsibility of the Federal Government, arguing that, “I am the Chief Security Officer of Katsina State only on paper.”

He, therefore, said that the call for his resignation was “absurd,” adding that the Federal Government security operatives in the state do not receive orders from him.

“The only things they take from governors are the financial and material assistance (both solicited and unsolicited) which they extend to the security institutions in the states,” Masari said in the statement signed by his Director General, Media, Abdul Labaran Malumfashi.

The statement reads in part: “Security is on the Exclusive List of the Nigerian Constitution, which means it is exclu- sively a Federal Government affair.

“In matters of security, a governor is the Chief Security Officer of his state only in name because the various security chiefs working in the state take orders not from him, but from their superiors in Abuja.

“Governor Masari is second to none when it comes to proactive engagement with security agencies in the state.

“Masari is not the first governor to make the suggestion. In states where citizens do not politicise security issues, they rallied round their leaders who had similarly admonished their people.

“Therefore, to suggest that Governor Masari should resign for his patriotic candour and courage in admonishing his people to wake up and resist the bandits by acquiring arms for self-defence, betrays a sheer lack of the understanding of the letter and spirit as well as the workings of the Nigerian Constitution, or a motive which is anything, but altruistic.”