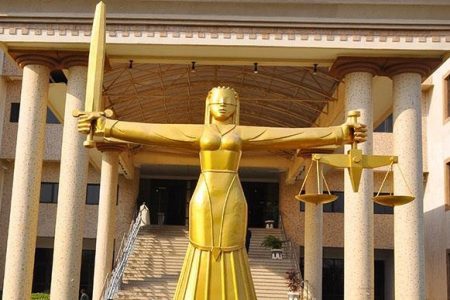 An Appeal Court in the Lagos Judicial Division has dismissed a case of plagiarism filed by the Federal University of Agriculture, Abeokuta (FUNAAB), against Dr. Janet Bamgbose and Mr. Akeem Bamigbade, who were lecturers of the institution.

Bamgbose and Bamigbade, who were associate professor and assistant lecturer, respectively, had approached a lower court seeking justice on claims that their appointments were wrongfully terminated on the allegation of plagiarism.

They contended that they were not accorded fair hearing in the course of appearing before the investigation panel and, subsequently, the Governing Council of the institution.

The lecturers said the decision by the university to terminate their appointments was malicious, arguing that the appellant did not comply with the provision of Section 18 (3) of the Federal University of Agriculture Act (Cap 22), Laws of the Federation of Nigeria, 2004, in constituting the Staff Disciplinary Committee that tried their matter.

They had appealed to the institution to reconsider its decision after they had been served with letters of termination, while the institution failed to respond to their pleas.

Some of the reliefs sought by Bamgbose and Bamigbade at the lower court were a declaration that their termination by the university vide its letters of termination, dated May 10, 2013, served on them individually was wrongful, unlawful, illegal, null and void and of no effect whatsoever, being contrary to the procedure on staff discipline as contained in the Section 18 of the Federal University of Agriculture Act.

They also sought for a declaration that the termination of their appointments by the university based on the final decision of the University Council composed of the members of the Investigation Panel and members of the Staff Disciplinary Committee, whose report was considered and approved was unlawful for being in breach of the principle of natural justice and  fair hearing.

The university, however, argued at the lower court that the respondents’ employment were terminated on the ground of plagiarism and that the institution complied with the Provisions and Procedure stipulated by Law.

Meanwhile, Justice J.D Peters of the National Industrial Court sitting at the Lagos Judicial division in the Suit No: NICN/IA/ 371/2013 on the 1st of December 2016, granted the reliefs sought by Bamgbose and Bamigbade.

FUNAAB dissatisfied by the decision of the lower court filed its Original Notice of Appeal on the 2nd of December, 2016.

Banjoko said: “From the above analysis, one can only safely conclude that the Appellant (FUNAAB), was the complainant and at the same time the judge determining the fate of the respondents in the allegation against them, and by so doing , it cannot be said that the respondents would enjoy fair hearing in the process. This appeal is hereby dismissed”.