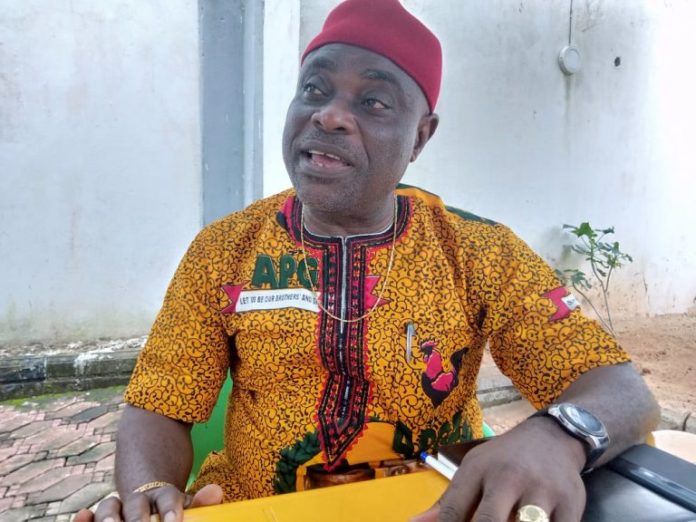 The All Progressives Grand Alliance (APGA) says it is confident that the Independent National Electoral Commission (INEC) will conduct free, fair and credible election in Anambra on Nov.6.

Dr Victor Oye, National Chairman of APGA, said this when he spoke with the News Agency of Nigeria (NAN) on Friday in Akwa.

Oye expressed optimism that that no group or political party would be able rig the poll.

He said that the party was neither worried nor distracted by rumours that some people were planning to capture the state.

“Capture does not exist in a democracy,’’ Oye said.

He said that the governorship candidate of the party, Prof. Chukwuma Soludo, stood out among other candidates in the election and would be massively voted for by the people.

According to him, only criminals and enemies are captured, nobody is going to capture Anambra, APGA has already won the election, people will vote and the votes will count.

“Nobody will come here and do anything untoward; nobody will rig an election that somebody has won popularly, more so, one where results will be transmitted electronically.

“We know that INEC is preparing to deliver a flawless election, the security agencies are getting ready and President Muhammadu Buhari has said that the election must be free and fair.

Oye said that APGA was not demoralised by the challenges faced in the process of electing Soludo as its candidate, describing same as the will of God.

He said what the state needed was a governor with tested administrative competence who could optimally manage human and material resources at a time of economic downturn.

“For us in APGA, we have chosen the best candidate for the job. In the eyes of the world, Soludo is the best, he is tested and trusted, he was governor of the Central Bank of Nigeria, where he performed wonderfully well.

“For him, leading the state is a very simple task for him, he is the man the state needs come Nov.6; he is a wealth creator, a grounded manager of human and material resources.

“The world economy is dwindling and Nigeria is worse off, so we need a governor that is going to be less dependent on federal allocation, somebody who can use little to achieve much.

“Somebody like Soludo is not supposed to have a competitor but here, everybody wants to be a governor, he has the intellectual, mental, spiritual, psychological capacity to deliver,’’ he said.

He said APGA led administration of Gov. Willie Obiano, had done well and that the governor was bequeathing a healthy and robust state to his successor.

“There is nothing like gale of detection in APGA, rather more people are joining APGA daily.

“Six persons were purported to have left the party but only four confirmed their defection in the Anambra House of Assembly, others are still much with us.

“Those that joined the All Progressives Congress (APC) are inconsequential to us, they can’t win their ward, as a matter of fact, APGA delivered them in the last election, and they don’t have structure.

“Anambra is one of the most viable states in Nigeria judging by the indices of good governance; security is top notch because the government gave priority to youth employment,” he said.

Oye added: “We are building an airport without borrowing from anybody; some states are begging the President to give them money.

“This government does not owe workers or retirees, Obiano is building roads and bridges effortlessly, the people love him and they will show it through their votes.’’(NAN)