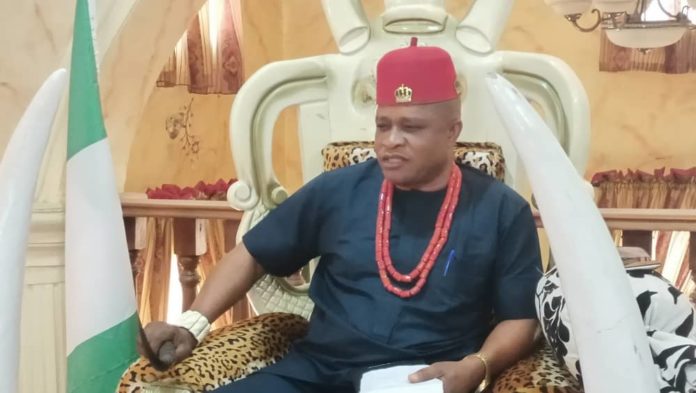 The traditional ruler Omoha Oboffia, Awkunanaw, Nkanu East LGA of Enugu State, HRH Igwe Igwesi Obiora Igwesi has called on politicians in the State to respect the existing zoning arrangement ahead of the guber election in 2023.

DAILY POST reports that the political climate in the State is getting more tensed over which of the three political zones would produce Governor Ifeanyi Ugwuanyi’s successor.

Speaking on the development, the monarch appealed to Gov. Ugwuanyi to look the way of Enugu East Senatorial zone in the choice of his successor.

According to him, “I am not speaking as a politician; I speak as a traditional ruler, as a father to all.

“This throne wields very strong authority that has spanned generations. Issues pertaining to me are often more spiritual; therefore, this interview is somehow spiritual and information I give today is not just mine, but what I think and how best it will please the gods and God Almighty.”

Igwe Igwesi said he would not sit by and watch sons and daughters of the State engage in needless political fight.

“As a royal father, I think it’s timely I make this appeal to politicians and my people.

“All those concerned are my own persons. Those in Enugu North are my brothers, and true Enugu State indigenes. The same with the Enugu West. We, Nkanu people, are asking for a chance.

“I don’t know if there was any written agreement but it is implied that there is already a running agreement. It might not have been written; but every agreement must not be written.

“Having watched the transition from Chimaroke, (East) to Sullivan (West) and Ugwuanyi (North), common sense does provide that at this time, Enugu East should start all over again.

“It is important that we make this emphasis to ensure peaceful continuity in our leadership in Enugu State.

“Everything good thrives under a peaceful atmosphere. And that is why I am making this passionate appeal to our brothers from West and North. Please, I beg as a father; let us allow a peaceful handover of the baton of governance to Enugu East. We consider it as a zoning pattern.

“Good things don’t end with governorship of a State. If by this zoning pattern you are in any way not fitted to go in for that position, my appeal is that you look around for any other convenient position, for peace to reign.

“I call on everybody to garner support for the people of Nkanu East, as a Local Government to produce the next governor. I appeal to Governor Ugwuanyi to consider this particular proposal.

“Let him anoint somebody from Nkanu East LGA as the next governor of Enugu State.

“I say this because of some obvious reasons. I have come to realize that Nkanu East looks like an abandoned area. There is need for sufficient government presence to be felt in Nkanu East.

“Since all these years, they were ignored and neglected; why don’t we give them this chance?”