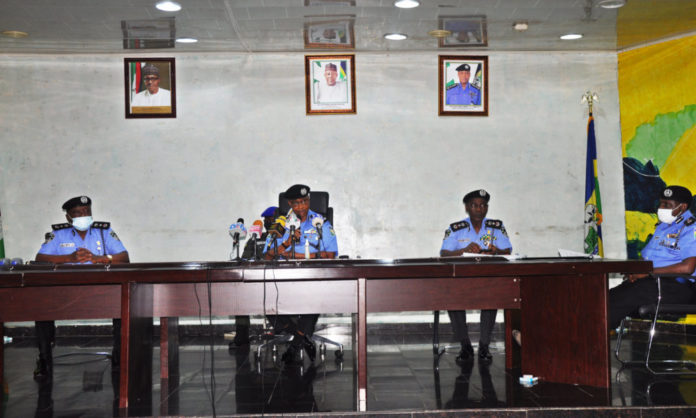 The police chief said the Force has concluded arrangements to deploy 34,587 personnel to Anambra to ensure a safe, secure and credible electoral process ahead of the polls.

The IGP, who made this known during his meeting with police commissioners and other senior staff in Abuja, said the decision for the huge deployment of police personnel was the outcome of an Election Security Threat Analysis conducted by the Force Intelligence Bureau.

Alkali, who charged the commissioners to project and strengthen the security architecture of their various Commands and prevent anticipated security threats in the most professional and proactive manner, warned that the police would not fold its arms to watch selfish politicians compromise the security of the state.

‘In assuring law-abiding citizens and stakeholders of their safety during the election, let me warn subversive elements who are bent on employing violence to attempt to threaten our democratic values, as well as any political actors who may want to adopt undemocratic and illegal means to achieve their aspirations to bury such thoughts now or be prepared to face the consequences, as they will be identified, isolated and made to face the wrath of the law no matter how highly or lowly placed they may be,’ he said.

Speaking on the state of security in upcoming Anambra gubernatorial elections, the IGP said: In furtherance to this objective, an Election Security Threat Analysis has been conducted by the Force Intelligence Bureau and based on the outcome of this initiative we have developed a Strategic Election Security Operation Order which will involve the mobilisation and deployment of a total of Thirty-Four Thousand, Five Hundred and Eighty-Seven (34,587) police personnel. This will comprise of conventional police officers, Police Mobile Force (PMF), Counter Terrorism Unit (CTU), Special Forces personnel, Explosives Ordinance Unit (EOD), Force Intelligence Bureau (FIB), INTERPOL, Special Protection Unit (SPU) as well as Police Medical Teams. We will also be deploying three (3) Police helicopters for aerial surveillance as well as detachments of Marine Police Operatives, specially trained Force Animals and our unique Technical Intelligence capability towards guaranteeing a safe, secure and credible electoral process in the state.

‘Drawing on our previous election security operations, we have also emplaced adequate forward and reverse logistics arrangements for a seamless police operation and have also made requisite arrangements to address the welfare needs of all personnel being deployed for the operation.’

Speaking on the General security situation in the country, the IGP said: The year is gradually winding down and as the lead internal security agency, I must remind you all of your critical roles in projecting and strengthening the security architecture in your Commands towards ensuring that anticipated security threats are prevented in the most professional and proactive manner.

‘Aside from the Anambra Elections, this shall form part of our discussion at this meeting, my charge to you is to return to your Commands and evolve strategies and implementation plans towards guaranteeing a stable security order. Accordingly, you are all to submit your End of the Year Security Operational Plans to my Office through the Deputy Inspector General of Police in charge of Operations not later than 22nd October 2021.

‘To complement your efforts, I can assure you that we shall soon launch and deploy a new fleet of patrol vehicles and other operational assets which are being procured through the intervention of the Police Trust Fund to re-energise the Safer Highway Motorised Patrol Scheme and strengthen your operational capacity,’ the IGP stated.