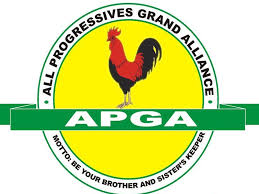 National Coordinator, All Progressives Grand Alliance Media Warriors Forum, Evang. Chinedu Obigwe has  said the  erstwhile candidate of the All Progressives Congress in the last Anambra governorship election, Senator Andy Uba has  been taught a bitter lesson by the duo of George Moghalu and Dr Chris Ngige.

Following the recent Appeal Court judgement which failed to recognize Uba as the authentic candidate of the party in the Anambra guber polls, Obigwe in a statement released in Awka yesterday expressed delight that the truth has prevailed at last.

He said Uba failed to understand that things have changed and that Anambra and Nigeria of today no longer belonged to the Obasanjo era where he (Uba) had the power to do whatever he wanted.

“The apron of shame  Uba is wearing now is truly well deserved because of his refusal to retrace his steps. He allegedly made many attempts to stand justice on its head in his case with George Moghalu but at last justice prevailed. The best thing for him to do now is to stop cutting corners”

“I doff my cap for the Court of Appeal Judges that delivered the latest master stroke judgement against Andy Uba in favour of George Moghalu. The action of the judges is a warning signal to everything –goes- politicians. It is for them to know that the era of broad daylight robbery of people’s mandate is gone for good in Nigeria.”

Obigwe lauded the duo of  Ngige and George Moghalu  in their fight against  Uba’s reported  impunity noting that their struggles would strengthen Nigeria’s  democracy.

“The only option left for the Uba is to change from his ways.  As at today, Senator Joy Emordi has been vindicated.  I remember her saying it boldly that Andy Uba lost the November 6th governorship election woefully because of his belief in old ways of doing things. We are now in new generation politically and that is why Uba is finding it difficult to cope.

“I also remember saying that every action of Andy Uba that is aimed at tampering with the mandate given to Prof Charles Chukwuma Soludo by Anambra electorates will end in shame and that is exactly what happened to him. Truly, Soludo governorship mandate is a divine mandate and no man born of a woman can battle with the Lord” he said.