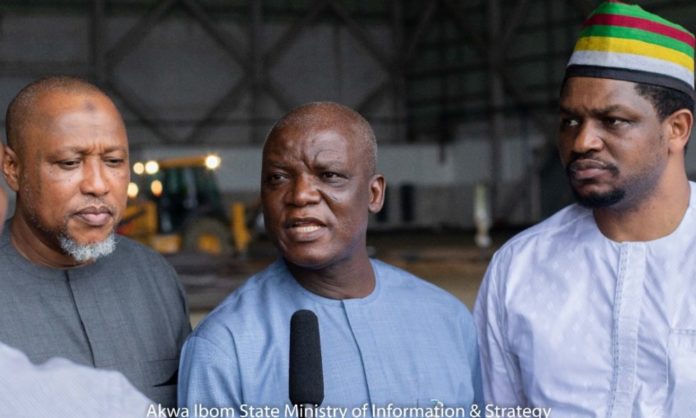 The Chairman, House of Representatives Committee on Anti-Corruption, Hon. Garba Shehu has described Akwa Ibom State as a land of opportunities, and trail blazer in the Nigeria’s aviation industry.

Shehu made the remark recently when he led other members of his committee on an assessment tour to the aircraft Maintainance, Repair and Overhaul ( MRO ) building located at the Victor Attah International Airport in Uyo.

According to the Federal Lawmaker, “Akwa Ibom is blazing the trail in the aviation sector, infrastructure development, and in deed, many other sectors “.

“Anyone who has flown Ibom Air would agree that it is probably the best airline in this country today; in terms of thier professionalism and promptness “.

Speaking on the conceptualisation of an MRO building by the Akwa Ibom State Government, and the decision of Governor Udom Emmanuel’s administration to complete the facility, Shehu described the MRO building as a landmark project, which, when completed, would service the aviation industry in Nigeria and in the West African Sub-region.

” An MRO of this nature which is built to maintain and repair even a boeing 747 airplanes is a great vision that was conceptualised by the state government. It is also great to see something that was only a vision become a reality, and there’s no doubt that in the years to come, Nigerians would appreciate the leadership of this state for this vision, because this MRO will give birth to many other ancillary businesses and other operations that would be linked to the aviation sector “.

The Federal Lawmaker and his committee members commended Governor Emmanuel for his visionary leadership, which he noted, was evidenced in his signature projects across the state.

Similarly, the project manager and chief executive officer ( CEO ) of Phenix Construction Technologies, Kobus Marais, explained that by accepting to complete the MRO building, his company was aligning with the Governor’s Completion Agenda, thus ensuring quality and delivery specifications of the project.

” Regardless of the few obstacles we have encountered in completing this project, we have the Completion Agenda even on our company’s mind to ensure that we complete this project on time “. He said .

According to Marais, ” Most of the work is already done, and what is left now is mostly the difficult part, which is the roofing “.

” This facility would open up a whole new market for Africa, and specifically the Nigeria’s aviation sector. When aircraft start coming here for maintainance, and with a proper cargo facility, it will surely bring a lot more businesses to the state “. Marais stated.