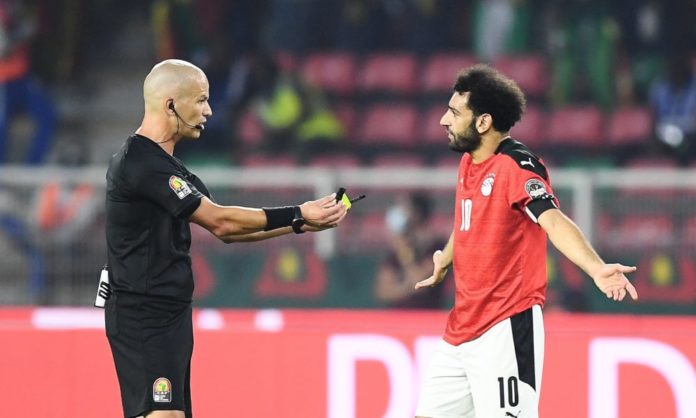 Gomes defended his handling of Salah during the AFCON final following his sarcastic gesture directed towards the Egypt captain.

Salah was unable to lead the Pharaohs to victory against Senegal and was unable to pose many threats during the first half as the Teranga Lions attempted to stamp their authority on proceedings.

The former Chelsea and AS Roma star then allowed his frustration to get the better of him in the 38th minute of the encounter after his Egyptian teammate Hamdi Fathi was given a yellow card.

Protesting to Gomes that the wrong decision had been made, the South African referee responded by offering his cards and whistle to Salah in a humorous fashion.

Speaking on the development, Gomes admitted he wasn’t going to stand for such antics.

“I respect the players that I officiate with and I don’t like to talk about the decisions I make on the field,” Gomes said, as quoted by Sport24.

“However, I do like to highlight some points for educational purposes and I also believe we have a responsibility to report positively on football matters so that our work is understood.

“Football has evolved tremendously and so have the players, who are highly respected and paid. Refereeing also has to evolve in that manner.

“We can’t stick to the old adage of officiating in a set way and style. All I can say is that on Sunday [Egypt’s AFCON final against Senegal], I chose to manage a top-class player [Mohamed Salah] in a way I thought it would be deemed appropriate and responsible.

“Football was the ultimate winner on the day.”

Salah has since returned to Liverpool and he featured in their Premier League 2-0 win against Leicester City on Thursday.