Youths in Abia State have faulted the zoning 2023 governorship seat to two districts instead of Abia North alone by the Peoples Democratic Party (PDP).

The PDP on Saturday night announced the zoning of governorship ticket to Abia North and Abia Central.

Reacting to this zoning arrangement, Abia youths, under the aegis of Abia Youth Vanguard, described it as weird with sincerity, which is capable throwing the ruling party into a destructive crisis.

The youths said the action was a smokescreen for the actualisation of the self-succession agenda of Ngwa people through Governor Ikpeazu.

According to a statement issued in Umuahia by its chairman, Comrade David Onwuneme, the youths said if Governor Ikpeazu and PDP believe in the Abia charter of Equity, which they cite, the governorship should be zoned solely to Abia North, in accordance with rotation arrangement in the state.

“The zoning started in Abia North in 1999, with Orji Uzor Kalu. Then it went to Abia Central in 2007 with TA Orji after which it got to Abia South with the incumbent, Okezie Ikpeazu  in 2015. Naturally therefore, it should return to Abia North in 2023,” the youths argued.

They said the zoning arrangements, since 1999, had always been for one zone at a time and never two zones as announced by PDP.

According to them, it was also weird that Abia Central which handed over to Ikpeazu just seven years ago is included for the 2023 contest because of the quest for self-succession, knowing that Isiala Ngwa North and South are in the zone.

It drew the attention of the governor to the fact  that his predecessors were never unambiguous in their choice of successors with the Abia charter of Equity in mind.

They said that when Ikpeazu told a delegation of Bende people who visited him that he will point the way, they expected him be explicit and not throwing the state into confusion and crisis.

“His predecessors were explicit and unambiguous and that’s why the people followed them. You can’t point to a thick forest and expect us to follow sheepishly,” they pointed out.

They advised the governor to learn from what happened to former Gov Rochas Okorocha of imo State when he tried to foist his son-in-law as his successor.

They argued that since the governor claimed that his only visible achievement in the state in the last seven years has been peace, he should choose a successor from Abia North to sustain that legacy.

The youths warned that the continuing attempt by Ikpeazu and his associates to foist an Ngwa man as his successor would have a catastrophic consequence in the state.

” For him to avoid the impending chaos and for him to secure his political future, His Excellency should in the next 72 hours pick his successor from Abia North. That’s the way he should point to us and we follow,” the youths concluded. 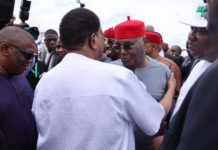