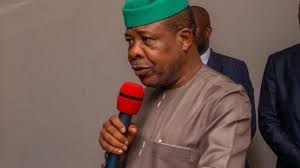 He gave the assurance, on Wednesday, in Owerri, during a civic reception in honour of the party’s National Secretary, Samuel Anyanwu.

The former House of Representatives deputy speaker said APC has grown stronger despite the setback it had and has also learnt from its past, stressing that the party was prepared to deliver greater electoral outcomes.

Ihedioha thanked the National Chairman, Iyorcha Ayu, PDP governors, other notable leaders and supporters of the party for gracing the occasion, and reiterated that the party will bounce back to Douglas House.

Ayu, in his address, appealed to the PDP faithful in Imo to put behind them the agonies of the lost governorship mandate which Imo people gave the party but was upturned by the apex court.

The former Senate president, said victory is certain for the PDP in Imo State and the Federal Government.

He called on the leaders of the party in Imo to work together in order to take the reins of power in the state, which he said has become very certain.

In his remarks at the event during which stalwarts from other political parties were also received, Anyanwu said PDP has one common enemy which is APC. He said PDP is united in the state, promising never to use his position to witch-hunt anybody.