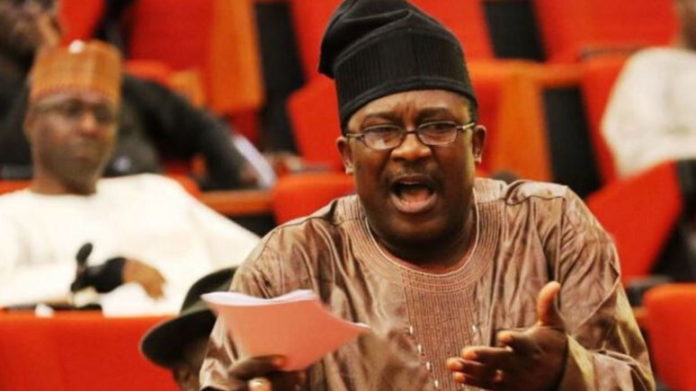 Smart Adeyemi, the senator representing Kogi West in the National Assembly has declared support for the president ambition of Governor Yahaya Bello.

The APC Senator drums support for Bello during the launch of Global Alliance of Progressive Professionals (GAP3), a youth non-Governmental organisation established to campaign for the 2023 presidential ambition of Governor Bello.

He commended the youths group and appreciated their gesture and determination to support Bello to run for the office of the president of Nigeria.

He said “We are fully encouraged that the younger generation believe in that government and that is why we are here to give them the support.

“So, they can move further by going round the nooks and crannies of the nation to speak about those qualities they have seen in Gov. Yahaya Bello.

“The governor is highly a visionary young man, and has capacity for leadership and he is with intelligence. He has demonstrated that in Kogi state where he is able to police the state effectively, “ he said.

Adeyemi noted that Kogi today was the safest of all the states in the northern region, adding that the socio economic development of any political entity was about how safe is the environment.

He said that what Gov. Bello had done was to make Kogi conducive for foreign investors, saying that it was already happening in the state.

“You have seen quite a number of investors coming to Kogi now , so I think Nigeria require a leader who will police the nation well to be able to accelerate socio economic development of our nation.

“Leadership is what everyone should be concerned about in Nigeria and if some group of youths can organise themselves across the country, what else do we have to say than to support.

“And to call on all Nigerian youths to join the team of GAP3 and help to mobilise more support so that we can have a young dynamic man as the president in person of Gov. Yahaya Bello, “ he said.

The National Coordinator, GAP3, Mr Ahmed Chikaji said that the gathering was to make history in the Nation’s political space to formally endorse a man who had distinguished himself in all spares of human endeavours.

Chikaji said that the vision of the group was to build an egalitarian society where opportunities were provided in the overall development of human society for growth and development.

According to him, our mission is to contribute to the development of global community through the building of a Nigerian society.

This he said would be where citizens were provided the enabling environment and opportunities to develop their potentials educationally, socially, economically, culturally and politically.

“It is on the above premise that GAP3 project was conceived as a platform for mass mobilisation, sensitisation and reorientation.

“It is therefore our collective resolve and determination to making sure our impacts are felt in the socio political space of our dear country Nigeria by taking common position in political issues.

“In achieving the above objective, GAP3 has commenced strategic and painstaking moves to mobilise over ten million professionals home and abroad for this project, “ he said.

Chikaji said that the group was determined to be proactive and bold in the choice and support to who led the country of the youths dream and the political party that would get the support and sympathy as the match towards 2023 general elections draws nearer.

The News Agency of Nigeria (NAN) reports that GAP3 movement was officially flagged off on Monday with Board of Trustees, National Executive Council, state coordinators and officials in the thirty-six states including FCT.