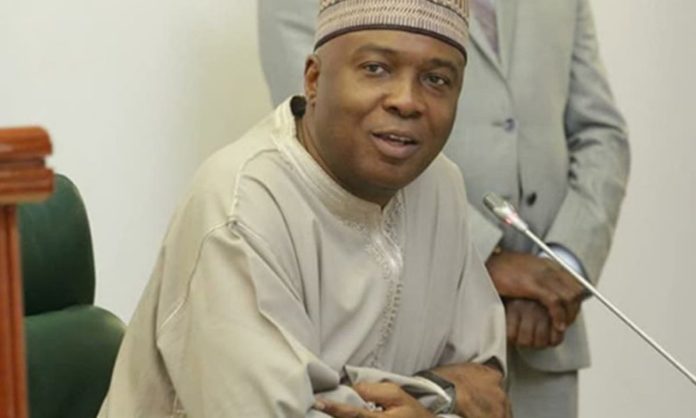 The immediate past Senate President, Dr. Abubakar Bukola Saraki has said that Nigeria is sick and needs a young, vibrant and intelligent leader to lead the country out of its present security and economic challenges.

Saraki was in Kaduna where he consulted with former Vice President, Namadi Sambo, former governors of Kaduna State, Senator Ahmed Makarfi, Ramalan Yero and other stakeholders of the Peoples Democratic Party (PDP) over his 2023 presidential ambition.

Represented on the consultation tour by chairman, Contact and Mobilization Committee of Abubakar Bukola Saraki for 2023 presidency, Prof. Iyorwuese Hagher and other members of the committee, including former National Chairman of the party, Alhaji Kawu Baraje and former Kwara State Governor, Sen. Mohammed Shaaba Lafiagi, he said that the country was sick and needed a leader to restore its past glory.

He stated that Nigerians must do all they could to do away with the ruling party, APC, stressing that the PDP has young and vibrant people that could ensure sanity in the system if given the mandate to rule the country.

Hagher said the presidency under Saraki would be a double blessing for the country, saying that he is a medical doctor, young and energetic who is ready to listen to the yearnings of the citizens and move the country forward in all spheres of life.

He explained, “We have met with former Vice President Namadi Sambo, former Governor Ahmed Makarfi, former Governor Ramalan Yero, former and serving PDP Senators. They gave us permission to come and address the larger house in Kaduna. We are in PDP because APC is not a party to join.”

According to him, Nigerians are sick and tired of the APC, adding that APC is a made up of strange bed fellows that came together to bring hardship on Nigerians through civilian dictatorship.

Responding, the Sate Chairman of the PDP, Mr. Hassan Hyat used the occasion to condemn the recent impeachment of the Deputy Governor of Zamfara State, a PDP member, as well as state of security in the country.