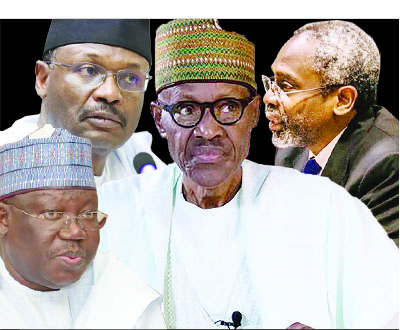 Plans by the Independent National Electoral Commission (INEC) to adopt new models in the conduct of the 2023 general elections may hit a brickwall if the National Assembly refuses to pass the Electoral Amendment Bill into law in record time.

The heightened fear that the National Assembly, predominantly controlled by lawmakers elected on the platform of the ruling All Progressives Congress (APC), may not pass the bill into law in record time became rife recently, when the opposition lawmakers met to discuss on how to mount pressure on the leadership.

The Bukola Saraki-led National Assembly had attempted the electoral reform, but failed to get the presidential approval at the end of the day.

The bill had sought to strengthen internal democracy, reduce the cost of politics, widen political participation and the conduct of free, fair and credible elections through technological innovations and an electronic database. However, there were concerns raised over the enforceability of some of its provisions.

President Muhammadu Buhari in refusing to sign the bill had said: “I am declining assent to the bill principally because I am concerned that passing a new electoral bill this far into the electoral process for the 2019 general elections, which commenced under the 2015 Electoral Act, could create some uncertainty about the applicable legislation to govern the process.

“Any real or apparent change to the rules this close to the election may provide an opportunity for disruption and confusion in respect of which law governs the electoral process.”

The crisis that followed the attempted amendment in the 8th Senate, led to the suspension of Omo-Agege. The suspension was upturned by the court. Unable to be readmitted, Omo-Agege on the 18th of April, 2018, allegedly led thugs into the Senate chamber and snatched the mace.

Report of a committee set up to investigate Omo-Agege was never debated and adopted on the floor of the Senate. Omo-Agege secured a court order which forbade the National Assembly from indicting him. Fourteen months later he was elected Deputy President of the Senate.

In the ensuing controversy, Sunday Sun gathered from multiple sources in the National Assembly, specifically the Senate, that the President of the upper legislative chamber, Ahmad Lawan, was in a dilemma on how to ensure that the bill is passed into law. Lawan, had in 2019, soon after he was elected president, vowed that the bill would be passed long before the conduct of the 2023 general elections.

Lawan had also promised that it would be passed before the end of the first quarter of 2021.

“We’ve resolved to abide by the legislative targets and agenda that we’ve set for ourselves. We shall work assiduously to pass the Electoral Act 2020 before the first quarter of 2021,” he had said.

Questionably, the Committee on INEC, headed by a senator from Kano State, Kabiru Gaya, is yet to submit the report.

One of the sources said that Lawan is in a fix and is careful not to offend the powers that be who are covertly opposed to the passage of the bill into law before the conduct of the 2023 presidential and governorship elections.

The source said that the Senate headed by Lawan is yet to get an informal approval from President Buhari on whether or not the bill will be signed into law if passed by the National Assembly.

He said Lawan is also being pressured by some concerned APC senators and their Peoples Democratic Party (PDP) counterparts.

One of the APC senators opposed to plans by some elements in the National Assembly to frustrate the passage of tye bill is Bala Ibn Na’Allah, recently argued that though public hearings have been completed and inputs taken on amendments to the Electoral Act, there was the need for the lawmakers to do the right thing by passing it into law.

He said that Nigerians must talk to their members in the National Assembly to act patriotically during the consideration of the Amendment Bill.

He said: “We have finished public hearings, we have taken inputs, there are certain things that no matter how you try to be accommodative enough, they are practically impossible. But those ones that guarantee a free and fair electoral process have been taken into account and I am very sure we will give Nigerians an Electoral Act that they will be very proud of.

“Every Nigerian has a responsibility to talk to his representatives in the Senate and the House of Representatives, to accept the fact that he must act patriotically. He must place the nation above party interest in the determination of the provisions of the Electoral Act.

“Once we do this, we don’t have a problem. I am not sure there is any Nigerian, responsible Nigerian, who is not interested in an electoral law that gives us the comfort of conducting free, fair and credible elections.”

Na’Allah is not alone. The Electoral umpire, INEC is also raising a red flag. At a meeting with the Senate Committee on INEC, chairman of the electoral umpire, Prof Mahmoud Yakubu, expressed disappointment that the National Assembly is yet to pass the Electoral Act Amendment Bill barely one year to the conduct of parties’ primaries.

Yakubu said that the timetable would be released immediately after the Anambra governorship election scheduled to hold on November 6, this year.

He argued that “in order to do so, there should be clarity and certainty about the  electoral legal framework to govern the 2023 general election.”

But Gaya, despite the alleged delay tactics, said that the bill will be passed before the end of June, 2021.

Speaking on the latest development regarding the matter, Gaya noted that the amendment bill will soon be passed and that there will be no further delay.

He said that the leadership of NASS, led by Lawan was behind the delay in the passage of the Amendment Bill.

“I assure you that within this quarter, because we have other processes in the Senate and it is not only the Electoral Act Bill. I’m not the one in control of whether it is passed or so. It is the leadership, and the leadership is also committed to getting this bill passed and rest assured that within the second quarter, this bill will be passed. There is no fixing another date.

“Actually, the bill is ready. We also need to get the leadership involved. I know we have other important bills also along the line. We have the PIB, which is very important economically to this nation, and therefore we are also working on that,” he said.

In February, Gaya made a similar promise. He had stated that the passed bill will be handed over to President Buhari for assent in February, but failed to fulfill his promise.

He had promised: “We are doing the Electoral Act, we have virtually completed it. What we are supposed to do at this level is to bring it to the floor of the Senate for consideration and the floor of the House of Reps also for consideration. We are doing a joint hearing between the Senate and the House so that we can fast track it and also reduce the issue of having so many differences in the bill.

“If we are working together with the house, it means the bill will be one. The House bill and the Senate bill will be one. There will be no need to go for concurrence. I believe Nigerians will be happy with the Electoral Act 2021, which hopefully before the end of February, it will leave the chamber to Mr President for his assent.

According to the proposed Amendment, the INEC will be legally empowered to adopt electronic voting or manual as the case may be. Section 52(2) will be amended. The current law stipulates that “voting at an election under this Act shall be in accordance with the procedure determined by INEC.”

In the proposed amendment, the National Assembly said “the Commission may adopt electronic voting or any other method of voting in any election it conducts as it may deem fit.”

Amending Section  63(4) which states “provides that a presiding officer should count and announce the result at the polling units”, the National Assembly ruled out electronic transmission of results.

In total, there are 50 proposed amendments. Another key amendment is Section 65. The current Section states that “after results are recorded and announced, the presiding officer shall deliver election materials and the recorded results to persons prescribed by the Commission. This must be done under security and in the company of the candidates or their polling agents.”

Similarly, the House of Representatives is yet to march words with action in respect to the proposed legislation, which is intended to improve the conduct of elections in the country; as work on the new electoral has stagnated in the House.

The Electoral Act Amendment bill had scaled the second reading in the Green Chamber on November 24,  2020 and was referred to the House Committee on Electoral Matters for further legislative work.

The chairman, House Committee on Media and Public Affairs, Benjamin Kalu had told journalists, that the laying of the report was deferred because of a lot of members were away for the All Progressives Congress (APC) membership revalidation.

Kalu had stated that “the Electoral Act is very important to what we do and you cannot consider it when we have a lot of constituencies not represented on the floor.

“As you are aware, most members are at their various constituencies now particularly members of APC, doing the membership drive and if you consider the report and you cut out some members who are supposed to be there to see whether the clauses, paragraphs, the provision of the particular bill covers their interest or not, you are doing a disservice to the people that they represent.

“So in the wisdom of the leadership of the house, it decided to suspend it until we are able to have a fuller house to be able to do the consideration because it is one of those laws that affect the whole nation.

“It is time sensitive. In law, we say time is of the essence in the formalization of this Electoral Act and having that in mind, we are going to prioritise the Electoral Act because of the time element in it. Be assured that in no distant time, it is going to come up for laying because they have finished the technical work on it. So let’s have a fuller house that will be able to ensure that all the clauses carry the intention of the house.”

“The determination of the house is to get it discharged even before the end of April. As you all know, the report is ready, it was tabled for presentation yesterday. But due to the fact the most members wanted the report to come in and be considered the same day and the house needed to be full to do that, it was stepped down.”

It is almost three months since the laying of the report on the proposed electoral law was deferred. And with barely six weeks to the end of the June deadline, the House gave itself on the passage of the bill, the question is will the Green Chamber stand on its promise to give the country a new electoral act by the middle of the year?