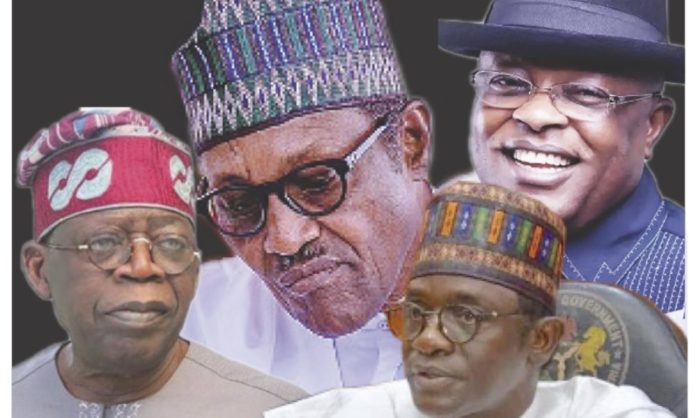 The ruling All Progressives Congress (APC) is now at a critical juncture in its drive to sustain its hold on power. Despite the troubleshooting effort of Senator Abdullahi Adamu-led National Reconciliation Committee put in place to resolve the internal wrangling plaguing the state chapters of the party, there is yet a seething cauldron of anger against the Caretaker and Extraordinary Convention Planning Committee (CECPC) headed by the governor of Yobe State, Mai Mala Buni, for its seemingly interminable tenure.

The renewed range of anger is coming on the heels of an alleged plot by the Committee to postpone the planned national convention scheduled for February till after the primaries in order to buy time to push for the idea of consensus candidates who would take over the mantle of leadership.

According to available reports, the move is part of the grand design by some governors working in concert with Buni to stop the presidential ambition of the national leader of the party, Bola Ahmed Tinubu.

One of the arguments deployed by the Caretaker Committee to canvass a shift of the convention is the need to resolve the personality crisis at the state level as well as the litany of litigations before it so that the party could go to the general elections with a united front.

In furtherance of its assignment, the reconciliation committee has been crisscrossing the country to resolve the differences among the contending forces at the various states, but with little success. Some of the states already visited by the Committee include Gombe, Ogun, and Osun.

In Ogun State, the 11-man committee met separately with Governor Dapo Abiodun, Senator Ibikunle Amosun, and former governor Olusegun Osoba, in Abeokuta, the state capital, and promised to adopt the principle of fairness in resolving the crisis facing the party in the state.

The duo of Abiodun and Amosun factions had on October 16 held parallel state congresses in the state resulting in some skirmishes.

A similar scenario also played out in Osun State where Governor Oyetola’s faction and a splinter group loyal to the Minister of Interior, Rauf Aregbesola, The Osun Progressives (TOP), held parallel congresses to elect new officers.

The effort of the reconciliation committee to strike a peace accord with the aggrieved parties, however, met a brickwall as the latter insisted that Governor Oyetola must resign his appointment as a member of All Progressive Congress Caretaker/Extraordinary Convention Planning Committee to give a level playing ground to all aggrieved members.

A little success was, however, recorded in Gombe State, as the committee achieved a feat by reuniting Governor Inuwa Yahaya of Gombe State with his estranged godfather, Senator Danjuma Goje, as well as other party bigwigs in the state.

The Buni-led Caretaker Committee had in October 2021 inaugurated a nine-member committee chaired by Senator Abdullahi Adamu with a mandate to reconcile all aggrieved members for a united front ahead of the next general elections. But up till now, that assignment remains largely a work in progress.

Now, part of the permutation for the 2023 power scheming is for the Caretaker to leverage the progress report of the reconciliation committee to appeal for more time to complete its assignment. By so doing, the emerging Exco would not only stop Tinubu from picking the ticket of the party, but would also work for the actualization of Buni’s aspiration to be vice president.

All these are symptoms of the fundamental differences among the strange bedfellows that coalesced to take the reign of power from the Peoples Democratic Party (PDP) in 2015. And if these tendencies are not properly managed, this may be the beginning of an impending implosion that would finally ruin the chances of the party to retain itself in power.  President Buhari, in his characteristic manner, was blunt enough to let this emotion out when he recently declared that the APC would lose power to PDP if the infighting within the fold was not nipped in the bud.

Last week, Tinubu and the Ebonyi State governor, Dave Umahi, took a step forward in the race for 2023 by notifying President Muhammadu Buhari of their intentions to take a shot at the Presidency in the next general elections. With the latest development, the stage is now set for the ultimate power game. For the contending forces, the first line of defence is to have firm control of the new Exco that is expected to emerge from the national convention. To this extent, the Caretaker Committee is on the defensive, which is partly the reason for intense moves to prevent the party’s convention scheduled for February from holding. By so doing, it will remain in office till the emergence of the party’s presidential candidate. Its idea of consensus arrangement to elect national officers is to achieve control of the party ahead of the primaries. But the path to further tenure elongation is already laid with landmines.

While Kebbi State Governor, Atiku Bagudu and his Jigawa State counterpart, Muhammad Badaru, have been identified as Buni’s strong backers, other governors are said to be on the opposing side, strategising on how to ensure that a hit-free and credible convention holds as early as possible. Other than that, a groundswell of opposition is also brewing from among the aggrieved members who are uncomfortable with the sit-tight syndrome.

For the benefit of hindsight, the party had on June 25, 2020, inaugurated the 13-man Caretaker Committee as a stop-gap to fill the vacuum created by the dissolution of Adams Oshiomhole-led National Working Committee (NWC) with a mandate to organise a national convention within six months.

But by guile and intrigue, the committee has consistently demanded tenure extension. This time around, concerned members are up in arm to challenge the legitimacy of the body, while also dismissing the reconciliation committee as a ploy to bid for more time.

A Senior Advocate of Nigeria (SAN) and former member of the National Assembly, Senator Anthony Adeniyi, speaking with Sunday Sun on the matter, berated the Caretaker Committee for foot-dragging on organising the convention, accusing Governor Buni of an alleged plot to scheme some aspiring presidential candidates out of the party.

“The crisis is lingering because the Buni-led Committee has decided to stay put in office. This convention ought to have been done officially one and a half years ago. Their mandate is to do the convention and then handover to the elected Exco. But they have continued to give excuses. I don’t think it is right for them to stay put.

“Buni has a job to do in Yobe, he ought to have done the convention and face his job. So, if there is any confusion, they are the ones causing it. People are agitated. They should allow people with ideas to take over the affairs of the party. They are scheming for consensus candidates. But we are saying that you cannot force consensus on people, they should go. People should be allowed to choose who they want from bottom to top. That is what democracy entails. Some of us have been in politics since the days of Action Group and that is what has been done.

They have been asking for an extension; extension for what? They can’t have another extension, we are agitated. The earlier they go, the better. I don’t have confidence in them anymore; they have overstayed. They are enjoying themselves there doing nothing. I don’t have confidence in them. The way they are doing shows that they cannot organize a credible convention,” he fumed.

Querying the legitimacy of the body, he added: “I can only hope that they will have a change of heart and do what is right. The constitution of the party does not even empower them to organize the convention. The Committee is just a stop-gap till the replacement of the dissolved National Working Committee (NWC). They are living by the grace of the President, they don’t have any power. They are there illegally. Many cases have been decided in that regard and there are still many more cases pending in courts.

“We are not suggesting that they should vacate today because we have to concede certain things. But they are there wasting the time of everybody just for them to scheme for 2023. What they want to do is to scheme out some aspiring individuals out of the race. It will not work.”

Another chieftain of the party in Ogun State, Senator Obadara, while also reacting, declared that nobody would sit in the comfort of his bedroom to dictate to anybody.

According to him, it is not abnormal for candidates to have the eyes represented in the Exco of the party, but then the wish of the majority must be allowed to prevail.

His words: “Politics is in the offing and the election is drawing nearer every day. I believe that after the convention the new executive will be the one to do the primaries. So, as politicians, everybody is getting prepared. It is not abnormal for aspiring individuals to have their eyes on the executive. It is part of politics.

“So, I do not see any crisis; it will be sorted out soon as Asiwaju already said. Preparing for a convention for a party as large as APC requires a lot of things. But I can tell you there will be convention.

“In a democracy, we need to vent our anger and everybody has that right. Everybody has a say in a party that he or she has invested emotion, monies, and everything. So, those who are agitated have the right to their own opinions. By the time we get to the convention, we will be able to decide on what is right for the party. What I am sure of is that nobody will sit in his bedroom and be dictating to anybody. A convention is an open thing.”

The Convener, All Progressives Congress Rebirth group, Aliyu Audu, in an interview on Arise Television, also weighed in, saying “Buni is the CEO of Yobe State; he should go to his state and face his job.”

One of the immediate challenges before the stakeholders now is how to reunite the various tendencies that have polarized the party along the CPC, ACN, and ANPP lines. These are the forces that coalesced to form the APC in the run-up to the 2015 general elections. With the onset of another season of politics, it is not unexpected that they would want to show their strength in the party. Therefore, in the face of the main opposition PDP angling to take back the reign of power, it is up to the leadership of the party to manage the situation well or lose out as President Buhari already warned.