Members of All Progressives Congress, APC, Kebbi Central Constituency, have unanimously expressed support to the candidature of Governor Abubakar Atiku Bagudu for Senate seat ahead of 2023 general elections.

The Zonal Vice Chairman, Kebbi Central, Alhaji Abubakar Bello, called for voice affirmation and raising of hands from party members during public display of the Form procured for Senator Abubakar Atiku Bagudu to vie for Senatorship in next year’s general elections.

At the event ,held at the Zonal Party Office in Birnin Kebbi, Alhaji Abubakar Bello called out the names of APC Chairmen and Executives of the Eight Local Government Areas which constituted the Zone for their written endorsement of the Senate form which was unanimous and overwhelming.

The Zonal Vice Chairman told the tumultuous crowd that four serving members of the House of Representatives of the APC purchased the Senate form for Governor Abubakar Atiku Bagudu in view of his sterling qualities and indelible legacy of his performance as Governor in the State.

He thanked all party members for their remarkable support to the APC , and urged them to work towards its victory in the 2023 polls.

Addressing the gathering, the Member House of Representatives, Maiyama/Koko Besse, constituency, Alhaji Shehu Wamban Koko said himself and three other members of the House resolved to procure the form for Governor Abubakar Atiku Bagudu because of his record of great achievements in addition to his love for the growth of Kebbi State and APC.

Hon. Wamban Koko solicited the support of the people of Kebbi Central Zone including APC members, women and youths as well as the Ulama towards the victory of Governor Abubakar Atiku Bagudu as Senator of the Federal Republic in 2023.

He equally requested Governor Abubakar Atiku Bagudu to accept the offer and contest as member of the Red Chamber.

On his part , Hon. Dallatu Kaoje explained that the procurement of the form was a promise fulfilled by the four members of the House of Representatives.

Hon. Dallatu put the question in Hausa to the large crowd of APC members, ‘ Kun Amince’ ? , which in a thunderouse reply consented by voicing out, ‘ Mun Amince’ ‘.

In a remark, the Speaker Kebbi State House of Assembly, Rt Hon. Muhammad Sani Abubakar Lolo, thanked the four donors of the form for their act of good deed , assuring that Governor Abubakar Atiku Bagudu would accept the overtures to contest as Senator in the election.

The Speaker while thanking people for their support to Government, urged them to to ensure that the party triumphed at all levels in 2023.

He advised eligible voters to make sure that they obtain their voters card, PVC to enable them cast their votes in the polls.

Also, the Majority Leader, Kebbi State House of Assembly, Hon Faruk Nassarawa Jega, urged Governor Bagudu to consent to the offer of Senatorial Seat, assuring him of the unflinching support of the people of Kebbi Central Constituency of achieving victory .

Executive members of the Kebbi Central Zone of APC and other top public officers witnessed the endorsement of the Senate form for Governor Abubakar Atiku Bagudu . 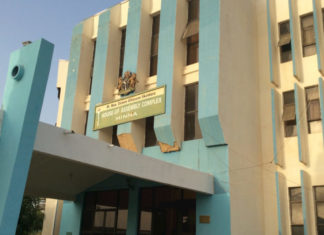