Rivers State Governor, Nyesom Ezenwo Wike said the 2023 general election in the State will be a crucial moment that the electorate will use to decide against those who hate the State.

The governor said, therefore, that the election will be a fight to finish and the Peoples Democratic Party (PDP) in State is going to win all at the end of the day.

Rivers State governor emphasized that at previous times when PDP went into election, it won the governorship, senatorial, House of Representatives, and State of Assembly seats, and in the forthcoming election the situation will not be different.

“You have to listen to your leaders through the DG (director general) of the campaign. They will come back to you, sit you down and tell you where we are heading to.

“It is a fight to finish. Do not be afraid. We are going to win at the end of the day. You know that we have always won. We will continue to win.

“We have never failed in anything we have told you. Success has always been with us. God has been with us. This time is not going to be different. God will continue to lead us.”

Governor Wike explained that on arrival in Omoku Town for the rally, they visited the Oba who gave them his blessings.

“Oba has done the traditional thing by blessing us and telling us, go to the field, my people are there, they will be with you, they will stay with you and we have seen it today.”

Governor Wike urged the people not to listen to candidates and leaders of other political parties who may come to them to solicit their votes.

He pointed out that such persons failed them when they had the opportunity to fulfill promises they made and to deliver development projects to them.

“Do you allow those who were previously given the opportunity? They failed you. Is there anything they can tell you again? ”

Governor Wike implored the people to repeat the level of support that they gave to the PDP in 2015 and 2019 in order to consolidate what his administration has already accomplished.

The governor stressed that he made promises to the people of ONELGA and has delivered development projects in the area in fulfillment of those promises.

Governor Wike mentioned that even though the immediate past administration awarded the internal roads in Omoku for reconstruction and abandoned them, on the assumption of office, he ensured the job was done.

He mentioned that his administration will commission the Kregeni to Omoku Road, and the Omoku-Egbema dualisation road by the end of February. He further stated that phase two of Ahoada-Omoku Road has already been awarded and will have street light.

In his speech, Sir Siminialayi Fubara, the PDP governorship candidate, recounted the successes of the Wike administration, which the consolidation team will reenact.

He said there will be further development, particularly in ONELGA where phase two of the Ahoada -Omoku Road will be completed to ease mobility in the area.

Sir Fubara urged them to ensure they deliver overwhelming votes for the PDP, and be sure that they will enjoy the gains of being the gas hub of the state, experience sustained peace, and economic empowerment, and enhance business opportunities.

“Let me also add, after our road for accessibility, Omoku will be a gas hub. You know what it means for your city to be a gas hub. Businesses will come, investment come, employment problem will be over.”

Rivers State deputy governor, Dr Ipalibo Harry-Banigo, who is Rivers West senatorial district candidate, assured that if elected, the interest of the State will be jealously protected.

On his part, the Director General of PDP campaign council, Felix Obuah said the people of ONELGA already, are PDP converts, who have vowed to use their PVC to deliver all candidates of the party on election day.

Earlier, Governor Wike, who was accompanied by the deputy governor, the PDP governorship candidate, and others, paid a courtesy call at the palace of the Oba of Ogbaland, His Royal Majesty (Dr.) Nwachukwu S. Obuoha, Obi III in Omoku. 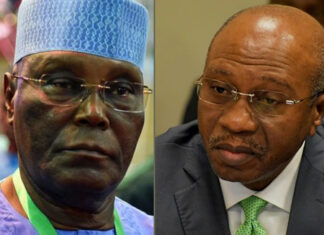