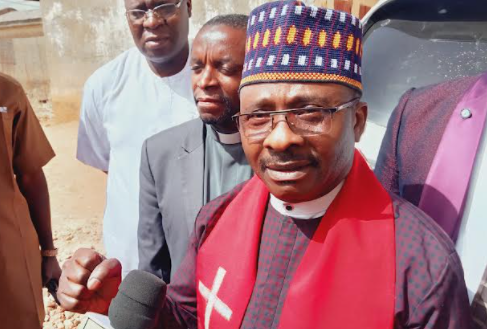 President of Christian Association of Nigeria (CAN), Rev. Samson Ayokunle said CAN will mobilise Christians in the country to produce the successor of President Muhammadu Buhari in 2023.

He solicited for the support and unity of Christian political leaders across the six geo-political zones to bring the vision to reality.

Rev. Ayokunle disclosed this on Sunday in Jos during an interview with Journalists after a Church sermon he preached on a theme “Defeating your enemies through the power of unity” at COCIN Church Rahwol Kanang, Jos, Plateau State.

He said CAN will also mobilized its members to kick against Christian/Christian or Muslim/Muslim ticket in 2023 in view of the religious plurality of Nigeria.

“That is the wisdom that will make this nation survive, when all the ethnic and religious groups are given fair play in the scheme of things; and Christians voters also should be able to vote wisely this time around.

“Let me say it clearly that any party that present Christian/Christian or Muslim/Muslim ticket is going to fail in 2023. We will mobilize the Christian body to fight against that proposition.

“No politician out of his own personal ambition disregard the sensibility of our society. Nigeria is a plural society with complexities, we must learn to manage it very well so that we can give everybody sense of belonging.”

He described Christians and Muslims as critical partners in the running of Nigeria as no faith can leave out another in political calculation ahead of the 2023 presidential election and win independently.

“I want both Christians and Muslims to come to understanding that will continue to keep us together and the nation.

He emphasized that united Christians in Nigeria stand, divided they fall, adding that Christians have the population that outsmart the number of vote President Muhammadu Buhari garner in 2019 election.

“How many million votes does a candidate need to emerge as President. In the last election, the President had about 14 million votes and that is not more than a population of two denominations in Nigeria talk more of the entire Christian body.

“If we are united, I can see rightly in the spirit, God knows the person and we by the mind of the spirit, we can know the person God want to use. We have leadership in CAN, and if we listen to the leadership, it will be well with us.” He stated.