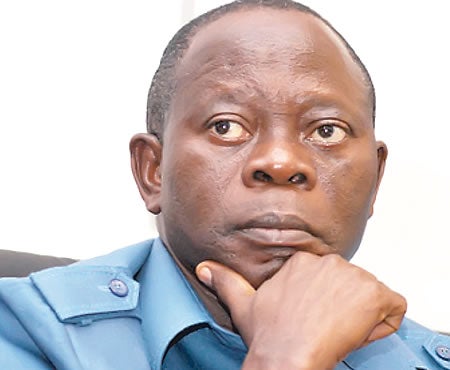 The Edo North Chapter of the South South Movement Group yesterday explained that their call on the former Governor of Edo State to contest for the Edo North senatorial seat is the demand of the generality of the people and not just the group.

Convener of the group, Mr Vitalis Eshokene, who addressed journalists, stressed that while they were not disturbed with insinuation about their ethnicity, they remain resolute to join the masses in calling on the former governor to contest, adding that the call is not borne out of any selfish interest but the need to change the narrative in the senatorial district.

He said that while the group acknowledge the fact that the district is blessed with capable hands, Oshiomhole’s antecedent in public service stands him out.

“He rose from being a mere tailor to become the President of one of the largest labour unions in Africa, NLC and also became a governor of the heartbeat of the nation.

“We all know his achievements in these offices, so there is no point asking wheather he did perform in these positions.

“Our desire to get Oshiomhole to contest is to replicate what he did as the governor of Edo and President of the NLC.

“There is no gainsaying that Oshiomhole, while he was governor of Edo State, left an indelible developmental foot prints and for God to have given us Oshiomhole we want him to come and perform what he did for the State in Edo North by attracting people oriented projects.

“Aside this, the district needs a rallying point; Oshiomhole is in a better position to provide this leadership which is currently lacking in the area.

“So, if calling on Oshiomhole to contest is a sin that has warranted us being labelled as ‘Political Jobbers’ we will gladly accept the name in good fate”, he added.

Another member of the group Alhaji Mustapha Buddy, while maintaining they were not bothered about the name calling, however emphaised that members of the group are not just mere voters in the district, but sons and daughters of Edo North.

“We must also let the name callers know that we are not hungry people as we still manage to take care of our families in spite of the present economic hardship without asking for their help.

“As for not being from the district, perhaps, the naysayers should carry out due investigation on our identities; myself Buddy, is from Ekperi axis, Eshokene is from Okpekpe to be precise and Isa Omozuapo is from Weppa. This is just to mention but a few”, he said.