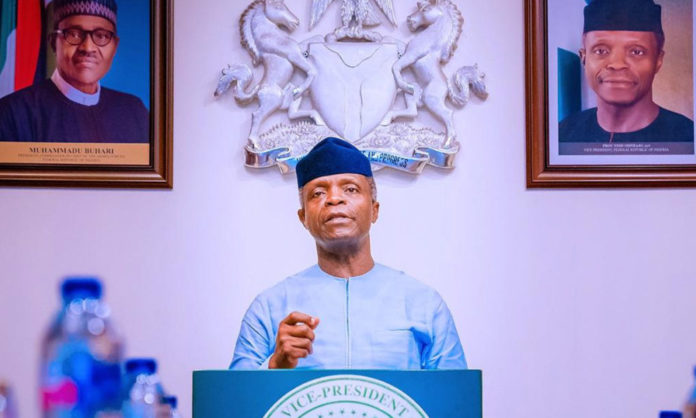 A group, Business Men For Osinbajo (BFO), has urged Vice President Yemi Osinbajo to run for the 2023 presidential election promising to buy the All Progressives Congress (APC) nomination form for him.

Its convener, Dr. Tayo Fashogbon,  stated this on Wednesday night in Abuja during the inauguration of the support group.

At the event attended by prominent businessmen, Fashogbo said they were wooing Osinbajo for the continuity of the projects and programmes of the President Muhammadu Buhari.

He said though Osinbajo was yet to declare his interest for the presidency, the group was putting structures in place to ensure he emerges the next president.

“He is competent, versatile and knowledgeable of the dynamics of the Nigerian business environment and the global economy,” he said.

The BFO convener said Osinbajo has not declared his presidential ambition because as a legal icon, he is aware that the Independent National Electoral Commission (INEC) has not lifted the ban on electioneering and would therefore not jump the gun.

In order not to be caught unprepared, Fashogbo said the group resolved to go ahead with its inauguration so that there would

Advertisement
be strategic planning and coordination of its activities.

“I stand here to welcome you on this journey towards an elevated Nigeria. This elevation will be brought about by a more intentional participation of the business community in the democracy of Nigeria. Until now, the business community, with all its great contributions, has only remained on the fringes of political relevance. This has continued to limit our capacity to influence the ease and outcomes of doing business,” he said.

Co-convener of BFO, Mr. Olatunji Davies, said business owners were pushing for an Osinbajo presidency because of his acceptability by Nigerians, irrespective of the economic, social, religious and ethnic background.

Davies said Osinbajo’s acceptance is further confirmed by the rate various political leaders their political inclination notwithstanding invites him to commission projects they have executed in their states.

“Our group called the Business Men for Osinbajo (BFO) is officially launched as a first major step to change the narrative. BFO is an independent group of volunteers from every sector and size of business, across the 36 states of the federation and the Federal Capital Territory. The mandate is simple: to deliver the incoming President Come 2023, Professor Oluyemi Osinbajo.”